May we enter the kingdom of Paradise, whether it be on imagination or our reality, the healing power of the Mother will have found its way back to us.

I am maintaining my promise to keep the door open to the Realm of Dragon. Whether that is the highway of the beloved that human beings can cross over into or not remains to be seen. Who knows what the August Activation will Bring!

The dragon is a symbol of evil, in both the chivalric and Christian traditions. In the Orient, it symbolizes supernatural power, wisdom, strength, and hidden knowledge. In most traditions, it is the embodiment of chaos and untamed nature.

A mythical beast with a combination of reptilian and serpentine traits, the Dragon features in the legends of several cultures the world over.

Although the dragons of the East and the West have quite similar physical characteristics, their symbolic representations are drastically different and, in a way, indicate the cultural differences between these civilizations. The most notable difference between the Asian and European dragons is that while the European folklore has portrayed the dragons as evil, fearsome and malevolent creatures, the Asian cultures regard them as benevolent beings.

And we wonder why the door to that healing power stays closed.

“The little queen all golden
Flew hissing at the sea.
To stop each wave
Her clutch to save
She ventured bravely.

As she attacked the sea in rage
A holderman came nigh
Along the sand
Fishnet in hand
And saw the queen midsky.

He stared at her in wonder
For often he’d been told
That such as she
Could never be
Who hovered there, bright gold.

He saw her plight and quickly
He looked up the cliff he faced
And saw a cave
Above the wave
In which her eggs he placed.

The little queen all golden
Upon his shoulder stood
Her eyes all blue
Glowed of her true
Undying gratitude.”
Anne McCaffrey, Dragonsinger

As I was writing this, an undeniable experience occurred. The land in front of me came alive and it was as if the dragon of the land was arching its back in front of me and under me. I even felt dizzy like the board was bending. I called Sarah, who is the keeper of this kingdom downstairs to share this primordial moment with her and she beckoned me to come and see something she had never seen on her land. It was not the sun. 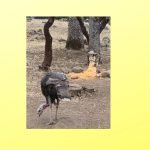 The sun is over here when I am. Here is the picture I took of the angel and turkey. You see the primordial kingdom lives in harmony and unity with all of the non-physical realms. They are able to shift between form and formless as once, could we. Now we only can when we dream and when we die. The Great Sorrow.

I live in realtime. If we do not live something then we should not talk about it as if we know it. All this having an opinion without the actual experience behind the opinion deadens our mind to what is real for each of us. My work on the planet of this time is to restore the registers for each person what, for them, is real. I love you. Tantra Maat

Be Safe, Creation, Self Study & Self Train