My dog Lily crossed over into the non-physical realms July 31st, 2020 for those of you who do not know. Since she is a being who does not know separation, I entered a journey with others in the Field of Tantra Maat of transcendency. It is my hope to gather together the last few days as an experiential journal for those who are entering into the new futures rising. Below is a journal entry. It is not mine to do to have you understand. I am simply sharing my journal with you. 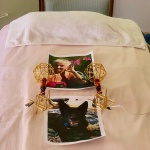 I wanted to share in the aftermath of the Exploring G.O.D. Matrixes telecall.

I woke up this morning and the gripping agony in my chest had elevated to a mild tachycardia. I recognized that when I said there was something to be achieved in the call. I did not realize until it occurred that what was to be achieved was a new higher frequency foundational base – a sustainable and maintainable place for what was occurring to occur with as little shock as possible.

Surrendering into those who have never left me; with Lily transitioning from physical to nonphysical; and the quantum energy that is available now as the multidimensions restore themselves here, we achieved a coherence that stabilized me/us/others in the higher realm[s] where realities of unity exist. [A dog that looks like lily is walking by right now.] 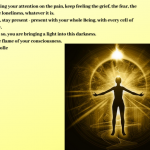 We in the 7 month Creation Project are working in the consciousness that is stabilized in the physical playing field through Template 3. The collective work is achieving a remarkable magic. Remember Template 3 is you generating an operational matrix to bring the quantum realms of what you hold/know/re-member reality to be into the physical realm. There was a result in the call that I want to note here.

When Jim spoke of unity in the beginning, the quantum nature of unity activated. I could feel it. It was as if he had dialed the code or set the field or activated an algorithm. Then when I said there was something to be achieved in the call another code connection between Creation and ourselves activated…there were others that spoke and activations occurred as I could see the lights come on in the quantum field of so above/so below re-establishing not only remembrance but actualizing it.  We were the Templates of Creation speaking the language of creation. That level has never occurred collectively until last night at least where I have been present.

Then having Myra and Hisbiscus speaking in the last part of the call who operate consistently in the quantum fields was no accident. Nothing more or less only the synchronic timing of timeless time as everyone on the call was being their direct link with Creation and in their speaking operating on behalf of all life. This is not a mental thinking thing. It is what occurs in the shared unity of a one soul species each having theirs to do, be, have in a synchronic weaving with Creation.

When Myra said the word ‘borderland’, the realm that Jim had called in ‘unity’ and the landscape that was revealed during the call by those sharing, a territory came into being – formed…a borderland….including the border but surrounding it and going beyond it. A coherent, cohesive, congruent unified inclusionary territory of participation was established. Do not concern yourself with understanding or worry that you may not yet have the registers yet…you will.

For the first time I got sleepy at midnight instead of collapsing from exhaustion. I could dream walk again instead of being caught in the debris field between so above and so below since last Friday.

Two days ago, in my work with the reharmonization of my so above/so below system I am doing with Deepak Chari, Jeremy and Lily showed me their light bodies that could regulate into various forms…Lily clearly loved the form she shared with me and that is our meeting place…that etheric form here. They really worked with me to see if this form I recognize myself as could dissolve into the light formlessness which carries so much more dimensionality and capacity but in that session I could not. Experiencing the stuckness of the calcification of energy in my body was brutal the next few days until after the call last night. In my dream walk in the borderland that was evoked as a Timeless Time territory last night, I was shown me a summit in the borderland. If there had been words, the words spoken would have been something like, “You [meaning those passed over, those passing over, and ourselves] will exist together at The Summit.” There were not words and the structure of language in writing this does not lay it out right, but it is as close as I can put in the written word. I will do a Creation Exercise 3 on it to unpack it and give it a place.

I am clear the Creation Project that has showed up in the Restoring the G.O.D. Matrix work. It is upon us with great respect and dignity for our endeavor if the higher realms had those concepts. The G.O.D. Matrix that we are part of restoring is unity – duh!

I am not saying we are embodied there. I am saying everything everyone is saying is showing where we are engaging with the quantum fields and within that much more is occurring in multiple territories you all are engaged in individually and monadically. We are taking territory. We are opened up and sharing the landscapes of multiple territory but those territories carry realities of unity. For me it is no longer being held prisoner in an experience of separation from what and whom I love. That my body, my mind, and my emotions register and are part of a system re-established that carries no capacity for separation.

Be clear. It is not up to us the result. We are informing Creation and the G.O.D.s [the generating organizing design] of creation and we are, in response, being informed. We are using the consciousness of our intelligence to bring back territory as we remember and a Generating Organizing Design of Creation begins to occur where we are standing both collectively and individually.

This is Template 3. Template 3 is not a human exercise. This template carries our consciousness of restoration with a specific algorithum that we are now experiencing. Yes!

I woke up this morning as stated at the beginning of this journal entry. I went upstairs to see Diane, then came downstairs to set up outside here on the porch to write this. When I came out there was a green jellybean. A single green jelly bean on the deck by my chair. When Jeremy was in physical form, his CB radio title was Jelly Bean and mine was River Queen. His favorite color was green. Mine cinnamon. We are all bringing the greater coherence of the unified field into play in this physical territory. I was thinking this morning that the mantra that works well here is: