The Story of my meeting the Mimzys 2009 is posted at the top of the Mimzy Project Facebook Live Page.

One of the greatest gifts of my life is discovering how valuable human beings are to Creation. Would that they would know! There would be no earth, no trees, no animals, no colors, no textures, air, water, fire without a Being that could enjoy it. I know for a lot of people the Earth is hell. Have they lost their marbles?! Human beings have aberrated from their original design but Earth…for me…clearly paradise…where I go to return to myself…to recover from pain…to awaken into greater system of knowing…

That is what that strange moment in time on April 4th, 2009 was for me. I feel like Trudy the bag lady in The Search for Intelligent Life in the Universe written by Jane Wagner & Lily Tomlin also quoted in Clarisse Estes Pinkola’s Women Who Run with Wolves’s book. I am in good company.

Once your brain moves out past the limitation of human circumstance all sorts of yummy connections to life occur. This was just one of them but a whooper. A lot of people are working to correcting what has gone wrong here. Me. I am interested in creating access points with that and those which operate on behalf of all life and have us exist as whole. And I am not alone…a lot of us are opening those pathways again…and wallah! it is amazing what is beyond the border.

The beauty of the Mimzy Project has been that for me.

In 2009, nor from 2010-2012 when we went to the mountain, did we know what 2020 would be like. But all of us changed in really good ways. Opening up into realms of freedom, delight, childlike trust, and more comfortable with our minds that now existed where we are part of a greater universe.

I got to say as I write this journal entry, I am sobered by the ‘coincidence?’ of the last date with the Mimzy’s was to be April 5th, 2020. 26 people planned to be in the next recursion of The Mimzy Project the 3rd-5th of April, 2020. We could not go. The Primordial Mother was seeking to bring harmony and balance to her planet and her forms and we were not to be in her way. The CoVid virus it is called, but seeing what so many of us experienced, it is so much more.

Five of us went on behalf of the whole. The participants were planning to find a way to be there even as the airlines shut down, the shelter-in-place was underway. But then the Airbnbs at Shasta shutdown. Not one person wavered. One of the phenomenons of the realms that these Beings come from is that there is just is what is and it is a date with Time that occurs as simply so. BUT…to see 26 people not have even one curfluffle was quite a beautiful experience and continues to this day. The collective of us were simply together somewhere in the realm of the project and what was happen on earth central was just to be managed and included. AWESOME!

When they could not get there, the participants held in place, leaving their investment in escrow for a future date. The April 4 had moved to April 5th. I just had to include this because this is part of the incredible experience we have been in. Of course, the date got moved to the 5th. We already had a 4 and we need the next number to secure the next date…the 5th.  Now I know in the human mind that seems ridiculous because the linear calendar is just a dead thing used to mark time. But not to the mind of the Mimzys and the mimzys. Then when we realized that we needed five to go to Shasta that date – the 5th- to reinforce the so above so below territory of which we were a part, we knew we had to have another date for us and them to meet…only this time we were generating it. What unfolded as all of us paid attention was the next date begins the 23 of October and goes five days completing the 28th of October. October 10 5+5. 23rd 2+3=5, ending the 28th 2+8 =10 = 5+5.

Can you imagine what it must be like for the greater realms of Creation to have human beings actually hearing and doing their part and generating their participation because they are as excited about the connection as the Beings that made the invitation are. Magic!!!

Five of us went on April 5th. We keep our promise. We stayed on the Mimzy Project Facebook Live. People got to hear the policeman tell Sarah she couldn’t pee on the highway that we have pulled off illegally. They got to see the mountain as we approached her. It was suppose to be raining and snowing but no rain no snow – only cloudy and grey. One the way we realized that we were to do the ceremony of connection keeping our date at noon in the store Crystal Keepers where Kea had purchased the gigantic obsidian ball for me and then took to Glastonbury to be part of the Spiral that was built there. This felt perfect and left us free of the effect of rain or snow. Facebook Live still going strong we began. We have bought crystals from the store for each Mimzy participant and imbued them each with the area of the world and the energy of the person in that place. We gathered them to build the little Spiral out of them for the ceremony. The area the Obsidian had been in as empty as they did ceremony there. Of course! Everything is posted on the Mimzy Project Page.

We began and the sun shot through the clouds, the rain stopped, the day could not have been brighter!

We completed the ceremony of connection at noon. Included with all the Mimzy Participants, people who had built Damanhur Spirals all over the world joined us. It was quite the moment. 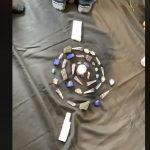 In that moment, I felt something that is beyond words, but that is what the Mimzy Project has been. As we meet one moment of time a broader spectrum of comprehension begins to occur. There is a Them. There is only the next structure of connection…never the why or what for…just the next.

I felt the earth. I felt our bodies as the geopathic intelligence of the earth. I felt the Field of Tantra Maat in Alliance with Damanhur, Italy and the Temple of Humankind. Shasta in 2010 had opened up my mind into matrix building restoring the matrixes that once held paradise on earth and there was no accident that led me to Damanhur where I found The Field of Tantra Maat blending into what they had been at work on for 42 years: strengthening a timeline that evolved human beings not the once that we were in the devolved them.

I knew that our date, October 23rd  October 28th, included connecting Damanhur to the portals and highways of Shasta. Not until recently did I know that we whoever the we is for it is more than this territory of consciousness…it is multiple territories. All I know is  a bridge will unfold between those Beings in the galaxy who identify the planet and her forms as Their Beloveds. Now we with them will set in play  the threads of love in the universe within which this planet was created will be able to be part of our reality once again and our theirs.

and at the time I wrote this I did not know there would be so much more.

You are becoming the Consciousness of Creation again