Always an Angel and Look for the Magic

Dedicated to three angels in my life: Georgia, Sarah, and Jackie

Good morning, it’s Tantra. It is June 27, 2018. Tomorrow is my only girl’s birthday. I was reflecting on  this extraordinary opportunity I’ve had in my life to have children. It was not something I was planning for or something that I expected. And yet my four children are the brightest thing in my life constantly. They are my treasures from heaven that decided to come through me. What a miracle that is. Today I was thinking about the day she was born, June 28th 2018. I remembered the two things that I was constantly saying to two of my children when they were young. I didn’t expect them to understand me or to carry it on, but in many way they all have. The two phrases I used to say all the time was, “Always an angel” and “Look for the magic”.

Something happened this morning when I went to the grocery store at 5 am. It was so the magic that I wanted to share it with. I do want to share this story, but there’s also a why? I want to share it. It’s not just because I want you to hear me talk. It’s because we’re in really rough times. But underneath those times there is still the wonder and beauty of life. Humans aren’t the only place there is goodness. There is underneath everything a goodness going on in this world right now and it’s working very, very hard to remind humanity that we love each other, that we love life, and that we love ourselves. We are designed to care about, not only our own lives but the life of all living things. Underneath all life, there is a template of what a human being is actually designed to be. And that template of what a human being is always designed to carry a linkage to wonders. That’s why I say, “Always an angel.”

For instance, my daughter and her companion were riding their bikes in a  very rural part of  Baja on the side next to the main body of Mexico. They lost their way. They were on the top of a big mountain. The ground was rough gravel. There was a place they could go two ways. There wasn’t a village in sight. They were way away from any highway.

All of a sudden there’s a young man standing there to tell them which way to go. You see. There’s always an angel. So always look for the angel in any situation. Most of the time they’re strangers because often when we’re hurt, we withdrawal from everyone around us we are close to and yes often it is those around us.

But this story is not about ‘always an angel’. This story is about ‘look for the magic’. Yesterday, something really painful happened personally. It wasn’t tragic. It was just painful. I think in these times are so painful in regards to what we’re becoming awake to. Even though it has actually been happening to human beings for a long time, more of us are aware of it now and it is not as acceptable or ignored as it once might have been. In the presence of that pain, I think when we find when we’ve hurt another that we love or that they’ve hurt us it, it just has a bigger stab. It has a bigger pain. It’s something that probably we would really, really not want to do. I certainly wouldn’t. And: we probably do it in innocence. I was very shaken and very sad about what happened, knowing I needed to let it go – knowing that even in the midst of the painfulness of it, there was a truth, not about me or about the other person, but about a situation.

But I always trust Creation. I trust.  I trust the underpinnings of no matter how bad things are, no matter how horrible, it isn’t, just human beings that come to our aid. It’s a magic, a magic of a bird that you’ve never seen before when you are tired and weary landing on a fence when you just think you can’t make it another day. It’s the magic of the wind blowing your hair when you’re crying. It’s of this earth and of this cosmos. It’s of the divinity. It’s of the primal. It’s of the consciousness that we are made from.

I thought, “Well, I’ll get up at six and I’ll go to the store because  Safeway’s open at five. But instead, I woke up at 4 am, managed the nap a little bit, but ended up going at 5. As I go in, they’re unpacking boxes. They’re busy, but everybody’s really chipper and saying hello. It’s like a little teeny get together in the early morning before even the birds are singing yet.

I was looking for my soup mix, which includes spicy, spicy peppers, Jalapenos, Habaneros, those kinds. As I was getting kale and spinach, a man was putting everything out beside me because that’s what they do at 5 in the morning at Safeway. I said, “Do you know about all these hot peppers?  I love spicy peppers!” He said, “Yes, I do.” Well, I now know which ones are sweeter when you cook them. I now know which one is really, really, really, really hot. I know which ones are hot enough to eat easily. I know which ones you’re supposed to stuff. Oh, it was like all of a sudden the seven trays of peppers are now part of my working existence. Part of my being informed. And he was so excited about it and so enthusiastic about it. We were having such a good time.

I thought, “Wow.”  I thought ‘always an angel’, always an angel to help you in your pain. I realized I had forgotten to look for the magic yesterday. I’m thinking this, as I go to get ground beef for Lily, my precious dog.  I see this Kobe beef. Now, a lot of you may know about Kobe beef, but I didn’t know about Kobe beef. I walk up to the butcher who is outside the cabinets who would have never been later in the day. He would have been behind the counter with lots of people getting stuff from him. I asked him about Kobe beef and he says, “Well, you know, I know this is gonna sound a little strange, but the Japanese raise their beef like their family and they massage them with milk and they pray over them and they do a ceremony.”  I’m standing there staring at him. Not only that, the Kobe beef was way on sale, like half price off. Tears just started streaming down my face and he says so kindly, “Oh, I guess you know what I’m talking about?” And I said, “Oh my God, I do, I do. Thank you.”  I’d been told by my Ayurvedic practitioner to have beef once a week, but I just couldn’t do it and now I can. Blessed beef.

Then he says, “Well, while we’re at it, look at these shrimp.” He said, “Normally they’re $20 a bag each. They look like little mini lobster tails. They’re called red shrimp and they are so good for you. They’re so nutritious.” Then he said, “We never have them at this price.” He didn’t know the next thing I was going to buy was shrimp. I hadn’t told him that.  I got two bags of $20 shrimp for $20. I was so excited. I went up to check out feeling so fed by the wonder and so fed by the magic.

I’m not too addicted to pain and suffering and misery and I don’t think the world’s a bad place. I think we’re having a really bad time and I think that something happened to human beings that really screwed us up. But life and creation on this earth and what we are and what we’re made of. Fundamentally. That’s beautiful. How could I do readings for 53 years if it wasn’t beautiful? I’m certainly not in it for the money and I deeply appreciate every penny anyone’s ever paid me because it’s allowed me to do what I’ve wanted to do on behalf of humankind and, for me, that’s the best investment they could have ever made as far I’m concerned.

I went to checkout. She says to me, “You look pretty chipper. What was your magic this morning?” I was elated.

I said, “Well, let’s start with Kobe beef!” She didn’t know about Kobe beef. she said, “Oh my God, I’ve got to try that!” Then she said, “but I know about the red tail strip. They’re delicious! How are you going to use them?  I said, “Well, probably I’ll just, you know, eat it.” And I said, “But I might add it to my soup.” Then I told her how I made my soup with a kitchari mix and what is in the kitchari mix. Then I helped her bag.

The lady behind us who had looked so dour was starting to look up. Her eyes were starting to get a little bit more glittery and she’s finally smiled when I went around to help pack my groceries. I was packing my groceries as she was at the end of her checkout.  When I, finished bagging my stuff and was putting it in my cart, I said, “Come on, let me bag for you!” She burst out laughing.

I just wanted to send this to you. I know there are rough moments. I know. I know the news is really, really hard for people who care and especially with the level of empathic response and the level of feeling helplessness. I know how hard that is. I feel it. I’m an empath. I feel it in my readings. I feel it all the time, but there’s always the magic.

Look for the magic. This will get us through to better times. You know I hate to say psychically that something’s necessary. It is certainly not necessary to hurt another human being or to be hurt, but things have just come to a head like a fever pitch and when things come to a fever pitch, they have a chance to heal. That’s what I would like to bet on.

Which brings you to my last phrase. My last phrase, which I didn’t say to my children, which comes from Paulo Coelho in his book The Valkyries.

In the preface, he writes, “Break a pact.” I suggest you try to break your pack with suffering. “Make a bet. “I suggest you make a bet that there’s always an angel and that you can see the magic.

Then the last statement says,  “Find an angel”

I’d love it today if I can be an angel for you. Tomorrow I’ll probably step on somebody’s toes and say the wrong thing and do the wrong thing. All of us are so tender right now. But just for a minute, I like the idea of being your angel.

On behalf of all life… 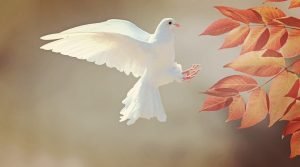