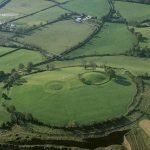 Let us know if you are joining us: Click Here

Google Map to this location

Navan Fort is our first entry portal into the 11-day long progress around Ireland.  When this journey’s planning began it was imperative that North and South were honoured as one land mass as it was in ancient times.  As the wisdom of the Tuatha De Danann rises with each step we take, we follow their lead…

This is where we let the Tuatha De Danann, particularly Macha, know that we have responded to the call. The forts were built on powerful connecting points between the earth and the sky so that aid could come when needed from the Earth or the Sky. There has always been a fight between that which goes against the original design here and that which is part of this planet’s original design. The gods and goddesses of the Tuathe De Danann protected Eire. They kept the sovereign nature of this planet sacred. Their stories live in Irish stories. They were wild characters for sure and, I think, loved living here. They were the protectors of the unity between the Cosmos and the Earth and lived here freely until they were driven into the netherworlds. Those dimensional portals are opening now and these points through our love and care and our desire to return to these relationships have activated.

They told me to come back when gateways between the different dimensional playing field were available again and they were free to come back into connection with us in the three-dimensional world. We will be activating our points of unity between ourselves and these ancient natures of being.

At Navan Fort and Armagh, it will be Macha, a sovereignty goddess of ancient Ireland. She was a feminine Being who carried connections to the higher-level forces of a territory connected with Navan Fort and Armagh. She as one of the daughters of Partholón, leader of the first settlement of Ireland after the flood.

As a sovereignty goddess, she personified this territory and conferred sovereignty upon a king by marrying or having sex with him. In the work, we do in the Field of Tantra Maat, we have been awakening within ourselves who we are as these ancient natures. It will be good to shed our too tight skin and return to what we are part of before the 3rd dimension was separated from the other-dimensional kingdoms. It will be good to reconnect ourselves back into the animation of life itself and to the sovereign natures that exist there

She did not take being unappreciated and her life and the life of her child being put at risk lightly. While she loves the domestic life, she does not lose her supreme power or authority.

Some of the Myths of Macha

She is one of the three sisters known as the three Morrigan – a trinity of sovereign natures that Eire was formed from.

Weaving together a global matrix

What this trip was about for me