I received my name from Fungi, a dolphin that visits us humans in Dingle Bay, Ireland. You can read about our encounter in An Irish Tale of a Modern Mystic, my first published book. When I heard the name Tantra Maat, I had no idea what the name represented or why after four years of avoiding the name, I felt compelled to take it.

Over those four years, I would share with people from time to time what had happened. I often received emails explaining why they saw that Fungi had given me that name. Now that I work in the power of a human being discovering themselves as a Field Being being a Field, I understand that Fungi was introducing me to the Field of Being that my personality and my life dwell in.

As the human species is no longer used by the misidentification of a Divine Source that separates them from themselves, from each other, and from their Creator, a wondrous event will occur. They are and will continue to open into their actual connection to the greater whole of which they are a unique and essential part. The feeling is one of wholeness, being here, connected. The names of Creation that have been used to harm humanity will become the words to a universal song of connection with what each of us was created from.

I got to have that experience my first half century of being here.

Tantra, the literal translation in Sanskrit, means an instrument for expansion. Tantra is considered a framework, a system in the Hindu tradition, but I am not of that tradition. The word came to me from the root of creation that lives in all things. I came into a resonance of connection that I felt in my flesh/spirit body that day as I sat on the shore and watched Fungi swim out to sea. His time with me complete.

What is the Field of Tantra Maat?

When I heard the word Maat, I had no association with the word whatsoever. One of my client in a letter where she thanked me for her session sent me a description that touched me to my bones. It was if the deepest part of my heart was being touched. Maat as a principle in the Egyptian mind bound all things together in an indestructible unity; the universe, the natural world, the state, and the individual were all seen as part of a wider order. The principle that generated that order between spirit and flesh, matter and energy, cosmos and planetary was named Maat.

She sent me two pictures. I looked at the two pictures and wept. When the people lived in the principles of Maat, Truth and Order prevailed in a system where all of life was honored. When Maat became represented by Themis, war and suffering had entered the human scene. Justice went from order to punishment. The civilizations based in being part of a living system where all life is valued and honored became civilizations of a broken system where justice became a cruelty. I looked at the picture of Maat able to be what she as a principle was designed to be. I looked at her lineage blindfolded with a sword. I experienced both the loss of balance and harmony and the deep heart of balance and harmony that broke open my heart and oriented my commitment to people. 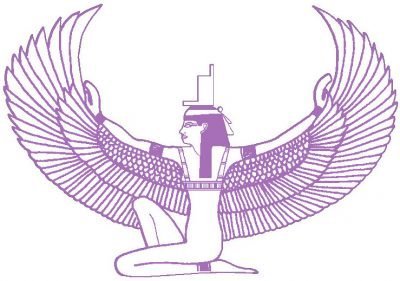 Only pay attention to what is next and/or right in front of you. Evolving into Vertical Time