This is the reality that has never been

This is the reality that has never been, but because they loved it….

I knew when I took this year on, that the dreams and the mystical awareness of the undercurrent of new realities would dominate my life. A few days ago, there was the Buddha in my dream under his tree saying to me, “Tantra, it is not the middle of the road. It is the space between.” Before that significant conversation out of the mainstream mesmerization. And on and on.

I realize I am moving into a deep territory and maybe even territory no one wants to discover. So many people are caught in the rapids of shallow waters.

But, I must continue the flow between humankind and Creation. In that, the webbing of unity between this species and that of which it is a part will harmonize and stabilize as worlds fail and new realities are born.

The concept of “no enemy/ no threat/ no harm” will touch some and others will be immune to its freedom. And yet, this could be the healing that’s up! This could be what we as a world are healing. That is why the dis-ease of ‘the enemy’ is rampant right now. Just like any other dis-ease. While it can threaten the extinction of form. While it can threaten our physical existence. It also has the possibility of completing its cycle and leaving us well, leaving us whole, leaving us vital. When we realize that what we had held as the enemy has a tendency to evolve, our worldview and our concept of reality begin to evolve also. The concept of ‘the enemy’ then evolves out beyond its own borders. As we let go of its importance in our lives, ‘the enemy’ sometimes even disappears from view. Even the concept of its existence can disappear.

That is how powerful the human mind is.

That is why I and other co-authors are meticulously putting together Mind of Creation, the next level of consciousness after the book Language of Creation. To give people the capacity to capture the power of their mind and its ability to shape reality.

Last month I wrote in my April blog:

Love is not just an emotion. It is our DNA. Love is not just random experience. It is the very foundation of our health and happiness. It is in truth the only thing that is ours. We, human being, have sought love through connections outside of us and sometimes been bitterly disappointed and sometimes well rewarded. But that is not where love exists. You were always the one who brings love to the table. Love is yours regardless of what called it to surface. That is what there is to honor. Your Love.

This space between love and the enemy. Could it be you? Are you where the power lies? Is it you that gives space…empty space…

This is the creature there has never been.
They never knew it, and yet, none the less,
they loved the way it moved, its suppleness,
its neck, its very gaze, mild and serene.

Not there, because they loved it, it behaved
as though it were. They always left some space.
And in that clear unpeopled space, they saved
it lightly reared its head, with scarce a trace

of not being there. They fed it, not with corn,
but only with the possibility
of being. And that was able to confer

such strength, its brow put forth a horn. One horn.
Whitely it stole up to a maid – to be
within the silver mirror and in her.”

Can they follow me, I wonder, beyond the disorganized maze of compacted thought? Can they move in the sentient intelligence of this wording? Can they read to be free?

I can feel the wheels of a higher organizing system turning as the deeper nature of things rise into our world and shift the deeper layers of our reality. I can still feel a Great Spirit guiding my mind and my fingers to write what I write and record what I record. A Spirit that lives in each of us is in the fascia of our hidden psyche. It is not trapped by the assessment of reality that we have been swimming in. This deeper webbing is showing itself more and more as I have left the shore of all right and wrongdoing and am in the presence of that which lives without harm.

Then yesterday. I went out to feed the deer. Manuel, a lovely Mexican young man, had with great care, dug a hole for my one-and-a-half-foot Christmas tree. He smoothed the ground around it and made a lip of rocks that left the impression of the little tree being very special. The little tree will now round out a grove of larger pines so that I can have the druidic grotto effect that I have longed for. The druids used rings of trees to communicate with the stars. As I leaned over to pour the dry cobb deer food into 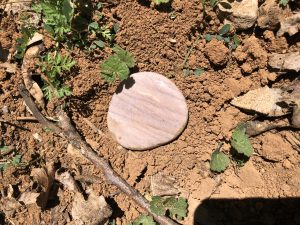 their buckets, I felt a strong urge to get water for the little tree that was on my right. Georgia had watered it and packed straw around it the day before, but the urge grew stronger as I tried to dismiss it. I went into my car and got out the large bottle of water I keep for Lily on our road trips. I went to the tree. I thanked it for coming to me and told it I loved it as I soothed the straw with water. A pink light glinted and bounced off of a rock right behind the tree on the slight of a hill. I looked up to see a smooth polished flat stone of striped mauve and lavender the size of my palm. We have no stones like that in the red earth stained rocks that come out of our ground. I was startled. I reached to pick it up and a powerful force pushed at me. I did not recognize the connection, but I could not miss the power. I knew that stone was for the tree, not me. In my forever inapt way of dealing with these connections, I asked if I could carry it with me down the driveway to walk Lily and then bring it back. I needed to gain a register for this new connection. There was a feeling of reluctance as well as intimidation that emanated at me if I did not bring it back. I felt the strength of a new alliance being formed. In those moments, what I do and how I do it means everything.

I took Georgia out to see it after asking her if she had put it there and she had said that she hadn’t. I watched as she and I walked away. She felt the impact of the power as it climbed up her spine.
Somehow everything that has happened in such a rapid succession is part of what is unfolding. It is so hard for a human being to believe the unity between the Earth and its forms is back, but it is. Something is happening. I, for one, am staying tuned and looking forward to participating.

Several years ago, I was shown that I would move into the deeper fabric of reality after my 72nd birthday. All things point toward that being true. It is shifting how I relate to the world around me. I am not the only one. Many are beginning to relate to worlds now forming in the substance of their minds that exist in unity with Creation. More and more I will take you on my journey with Creation in its deepest webbing and fabric. If you so choose, you walk with me and benefit from the journey.

2022.09.28. A Wisdom Moment before the Activation/Transmission tonight